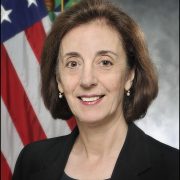 Geraldine “Gerry” Gerardi undertook analyses of economic policies for the federal government for nearly 40 years. Most of her career was spent at the Treasury Department’s Office of Tax Analysis, where she served as Director of the Business and International Taxation Division. Gerry contributed analyses to Treasury’s major tax reform proposals from 1977 to 2012, including Treasury’s proposals for fairness, simplicity and economic growth, corporate tax integration and many others. In 2010, Gerry was given the Distinguished Executive in the Senior Executive Service award by President Barack Obama “. . . for sustained extraordinary accomplishment in management of programs of the United States Government and for leadership exemplifying the highest standards of service to the public, reflecting credit on the career civil service.” Gerry has been a long-time, active member of the NTA, publishing in, and serving as a referee for the National Tax Journal and participating in NTA events.

Read Victoria Perry’s presentation of the 2017 Davie-Davis Award to Gerry at the 2017 Spring Symposium.