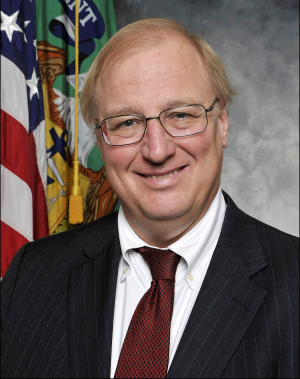 Dr. Mark Mazur is the recipient of the 2019 Davie-Davis Public Service award. Mark’s distinguished career includes service in academia, government, and the non-profit sector. He is currently the Robert C. Pozen Director of the Urban-Brookings Tax Policy Center. Mark received his Ph.D. from Stanford Graduate School of Business.

After four years as an assistant professor at Carnegie-Mellon University, Mark came to Washington, DC to begin an illustrious career of public service.

Mark started his government career as an economist at the Joint Committee on Taxation (JCT). After four years at JCT, he became a senior economist at the Council of Economic Advisers and then a senior director at the National Economic Council. In 1997, he moved to the U.S. Department of Energy, where he held positions as chief economist, senior policy adviser, director of policy, and acting administrator of the Department’s Energy Information Administration.

Eager to return to the tax world, Mark left the Department of Energy for the Internal Revenue Service (IRS) to serve as the Director of Research, Analysis, and Statistics. Mark led many notable projects at the IRS, including a redesign of IRS’s approach to measuring the “tax gap.” In recognition of his contributions, Mark received the Presidential Rank Award for Meritorious Service.

The National Tax Association is thrilled to recognize Mark Mazur for his outstanding contributions to tax policy and tax administration.