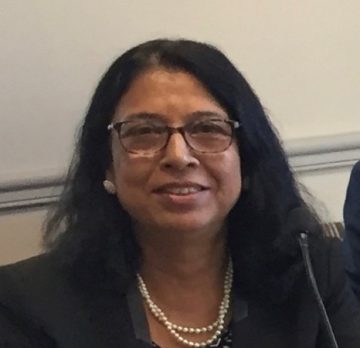 With deep sadness, the National Tax Association mourns the passing of Ranjana Madhusudhan on April 27. We send our deepest condolences to her family and friends.

Ranjana served as President of the NTA from 2007 to 2008, following her year as First Vice President. As part of her work with the NTA, she initiated a program on State and Local Tax as part of the NTA’s Spring Symposium. Since joining the NTA in the 1980s, she was a regular participant of both the NTA’s annual meeting and its Spring Symposium. During her presidency, she spearheaded the Special NTA Conference on Fiscal Sustainability and expanded the NTA’s focus and attention to issues related to fiscal federalism and state and local taxation. She was nominated to the NTA board in 1998 and chaired the program committee for the 95th Annual Conference on Taxation in Orlando in 2002.

“Ranjana was a beloved member of the NTA. She cared deeply about the organization, and was known universally for her kindness, good spirits, and willingness to speak the truth,” said William Gale, NTA President.

Her NTA Presidential Address, which she gave at the NTA’s 101st annual meeting in Philadelphia, was titled “Long-Run Fiscal Balance and Sustainability: Intergovernmental Perspective and a Collaborative Agenda” and focused on issues of particular concern to state and local governments. She gave her address just weeks after the financial crisis erupted in September 2008, a crisis that created extraordinary fiscal stress not only for the federal government, but for state and local governments as well. As she noted, New Jersey’s projected revenue shortfall tripled between September and October 2008. She stressed the need for intergovernmental collaboration and cooperation across all types of government during that time of crisis.

“Ranjana made extraordinary contributions to tax administration and economic policy during her more than three decades in New Jersey state government. She was a trail-blazer in many ways, including the forging of strong bonds between the government and academic tax policy communities. She was devoted to the goal of improving the design and implementation of tax policy, and she was a tireless promoter of the NTA and all that it embodies,” said James M. Poterba, President of the NBER and former NTA President.

“For over 30 years Ranjana has been one of my dearest friends, so I know how important the NTA has been in her life. Prior to her illness, I cannot remember her missing an annual meeting or spring symposium. She was enthusiastic and conscientious about putting together panels, and participated actively in the sessions, often asking great questions during the Q & A. She highly prized the honor of being president of the association. She planned to keep attending NTA meetings until she was 90. Alas, that was not meant to be,” said Daphne A. Kenyon, PhD, NTA Board Member.

Ranjana served as the Chief Economist of the state of New Jersey. This position was a capstone to her long career with the New Jersey Department of the Treasury, where she established her reputation as a valued expert in budgeting, forecasting, and public finance. She served in numerous capacities with the New Jersey Treasury and prior to the position of Chief Economist in 2018 had completed an eight-year stint as Deputy Director of the Office of Revenue and Economic Analysis where she also served as an economic adviser to New Jersey’s governor and treasurer.

“Throughout an exemplary four decades with the Department of the Treasury, she broke barriers as she rose to become the state’s Chief Economist. But, more importantly, I will remember Ranjana for her kindness and her fighting spirit,” said Gov. Phil Murphy in a government release.

She was also an adjunct professor at Rutgers University, worked as a consultant and researcher for the World Bank and was a member of the editorial board of the Public Budgeting and Finance journal. She began her career in state government as a Research Associate for the State and Local Expenditure and Revenue Policy Commission.

The New Jersey State Legislature passed a Joint Legislative Resolution acknowledging her life of public service and professional accomplishments. Link is unavailable at this time.)

An obituary in the New Jersey Globe is here

The NTA will recognize Ranjana’s life, career, and service to NTA at a future date.

Ranjana is survived by her husband, Madhu Kotta, her children, Aditya and Shefali Kotta, and her beloved granddaughter, Nora.