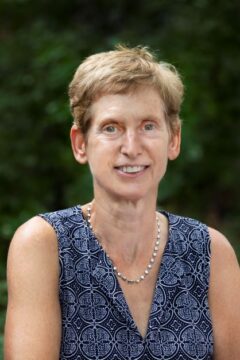 The Daniel M. Holland Medal was created in 1993 in the memory of Dan Holland, a Professor of Economics at the Massachusetts Institute of Technology Sloan School of Management, who was an internationally recognized researcher, teacher, and practitioner in public finance. The Holland Medal, the most prestigious award given by the National Tax Association, recognizes lifetime achievement in the study of the theory and practice of public finance.

This year’s winner of the Holland Medal, Rosanne Altshuler, is Professor of Economics at Rutgers University. She was formerly Chair of the Economics Department and Dean of Social and Behavioral Sciences in the School of Arts and Sciences at Rutgers University. Her research focuses on federal tax policy and has appeared in numerous journals and books. Rosanne was President of the National Tax Association in 2018, First Vice President in 2017, and Second Vice President in 2016. She has served as Editor of the National Tax Journal and Editor of the Policy Watch section of International Tax and Public Finance. Rosanne has been a member of the Board of Directors of the National Tax Association, the Panel of Economic Advisers of the Congressional Budget Office, and the Board of Trustees of the American Tax Policy Institute. She has been active in the policy world as Director of the Urban-Brookings Tax Policy Center, Senior Economist to the 2005 President’s Advisory Panel of Federal Tax Reform, and Special Advisor to the Joint Committee on Taxation. She has testified before the Senate Finance and House Ways and Means Committee.

Rosanne received her B.A. from Tufts University and her Ph.D. in Economics from the University of Pennsylvania. Her dissertation was the winner of the National Tax Association’s Outstanding Doctoral Dissertation Award in 1988. From 1987 to 1992 she was an Assistant Professor in the Department of Economics at Columbia University. She moved to Rutgers University in 1992.

Rosanne’s research concentrates on the effects of taxation on corporate behavior. Her research has been published in numerous journals including the Quarterly Journal of Economics, the Journal of Public Economics, the National Tax Journal, and International Taxation and Public Finance. She has also contributed chapters to numerous conference volumes on international taxation published by the National Bureau of Economic Research.

Rosanne has been a visiting consultant at the Office of Tax Analysis at the U.S. Department of the Treasury, a visiting scholar at the National Bureau of Economic Research, a research fellow of the National Bureau of Economic Research, and a visitor at Princeton University, New York University’s School of Law and at the Robert F. Wagner Graduate School of Public Service at New York University. She has been involved in numerous projects sponsored by both the U.S. and Canadian governments.

Long admired for her integral role in helping run the National Tax Association, Rosanne was granted the distinguished honorary member status at NTA in 2019, an honor only given to 37 other individuals over its 114-year history. Rosanne was the first woman ever to receive this honor.

Rosanne’s impressive body of work will be celebrated at the NTA’s 114th Annual Conference on Taxation in November, at which time she will receive the Daniel M. Holland Medal.